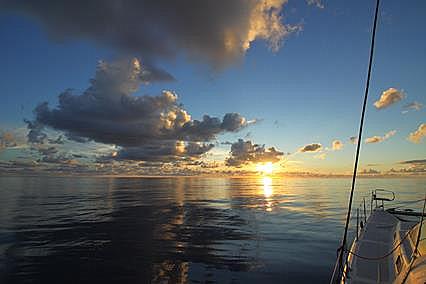 We had a very calm, peaceful and wonderful first day to our voyage, departing Cape Town on Monday, 29th January 2018. After the bustle of the past two years it was difficult to believe that we were actually on our way.

However, shortly after dinner the wind and swell had picked up and Karin’s seasickness kicked in whilst requesting weather on the HF radio. After three miserable days she turned the corner, having only eaten three apples and two sausages. I don’t know who was happiest that she found her sea legs, me or her!

Initially we were getting a 2.5m swell and a constant 17 – 20 knots of wind, both from the aft port quarter which was more than we needed to whizz along.

It took a few days to settle into the routine of an ocean crossing as I had imagined it. A nice wind from astern pushed us along at around six knots with mainsail and genoa goose winged (sails set on opposite sides).

We enjoyed champagne sailing in the trade winds with their never-ending supply of steady energy, making sail adjustments outside the normal morning and evening changes a rarity. We shortened sail every evening to minimise foredeck activity after dark when one of us would be asleep.

One of us was constantly on watch 24×7, using our phone timers to alert us every 15 minutes to check the radar (at night), AIS (automatic ship identification) and the horizon for ships. If feeling tired, we napped in the cockpit.

We learned to really appreciate our solar system which generated enough power for the essential autopilot, other navigational equipment, watermaker, geyser, bread maker and to keep all our portable electronic equipment charged. Enjoying a warm fresh water shower each night is a real luxury on a boat!

Out at sea the miracle of communication became apparent to us. We were truly amazed that we could send limited email and receive weather reports via our HF radio. When you’re out on the deep blue ocean communication with your dearest is very special, no matter how many hours it takes to send and receive messages.

The colour of the Atlantic water amazed us – bright violet blue and crystal clear, especially when scooting past under the escape hatch.

During our night watches we were often mesmerised by Moondust’s motion, the soft warm breeze and flashes of phosphorescence in the whiteness of the water surging astern, mile after never ending mile.

After about four days we found our first small, silvery flying fish on the deck and were fortunate to catch brief glimpses of them soaring above the water for a few seconds with their dainty ‘wings’ – in fact long gossamer-like pectoral fins.

We were also pleasantly surprised to find birds hundreds of kilometres from land, a soaring Sooty shearwater and some beautiful Red-billed Tropicbirds, of which there apparently are only 1 200 pairs.

After a few days we put out two fishing lines and we were extremely pleased to catch three dorado, which added welcome variety to our menu.

A week later we were thoroughly settled into the soft lap of the ‘milk run’ as this crossing is called, with winds of 10-15 knots from astern and very little swell.

We hadn’t seen a ship for a couple of days and were just debating the merits of our 15 min horizon scans when, at our next check, we spotted a huge tanker approaching us obliquely from ahead about four minutes away. The 320m long Sophia had obviously changed course to avoid us. We were doing 8 knots and she 12, so we closed at 20 knots (just under 40km/h) meaning that from first sight on the horizon it would take us about 17 minutes to meet. As it was she passed 250m off our port beam.

Needless to say, we continued to scan the horizon every 15 minutes. We found it best if I did the early evening watch up till around 24:00 and Karin took over till around 05:00. Then each of us would have another few hours’ sleep during the course of the morning.

On about our 12th day we hit a really dead patch, with only 1 to 2 knots of wind. We pulled down all sail and just enjoyed the peace of a warm, tranquil afternoon at sea. Karin went for her first swim with 5km of water under her, tied on with a safety rope in case the wind came up.

We decided to make good use of the calm to burn our plastic garbage in a fire bucket outrigged overboard.

I knew that oceans are massive stretches of water, but you have to do an ocean crossing to truly appreciate just how huge. Apart from the calm patches, we sailed at about 5.5 – 6 knots around the clock, making good progress, but it still took us 16 days to reach St Helena, a distance of about 3 000 km.

We made landfall at James Bay on February 13th and spent 10 glorious days on the island (more about that in our next blog) before we headed southwest.

The ocean was still the same extraordinary blue with flying fish around, however, there was a definite difference in the weather pattern.

Apart from leaving Cape Town in full sun we hadn’t had one really sunny day until we reached the island. On the second leg we had bright sunny days with cumulus clouds gathering on the horizon which made for the most beautiful sunsets! It was also much warmer – 31 deg C during day and cooling about 4 degrees overnight.

In general the wind was much lighter so we mostly sailed with our genneker. However, we twice had to take it down at night as surrounding squalls brought gusts of up to 20 knots.

We hadn’t seen a ship for a week since leaving St Helena but on crossing the shipping lane to Brazil we passed several bulk carriers, container ships and a longline fishing vessel. We remained vigilant and twice more we had vessels on a collision course. Unbelievable on this enormous ocean!

After about nine days we hit another ‘hole’ and several times during the next few days the wind dropped completely, so we let all sail down.

We embraced this tranquil and peaceful time by swimming, untangling a fishing line from around our port prop, burning plastic garbage overboard and even had a braai one evening! This was bliss and we didn’t once consider starting the engines.

Apart from watch keeping, the only obligatory jobs were repairing minor damage to the genneker, running the water maker, making bread, cooking up some simple adjuncts to our frozen prepared meals, getting weather reports, sending and receiving emails to family and friends and making infrequent sail changes.

We had lots of time to relax, swim, catnap, read, attempt Sudoku (without much success) and do crossword puzzles. After our frantic two years of preparing for this voyage, we thoroughly enjoyed this time out and the more we chilled, the lazier we became! We haven’t had this abundance of time since we were kids.

On one of these calm days a masked booby landed on our solar panel, relieved himself and then groomed for more than two hours, ignoring us peeping from close-by.

We hoped that the second leg of our ocean crossing would take about 20 days, but with about a week of extremely light to no wind, we realised that, unless things changed dramatically, it could take us at least a week longer. Fortunately we had enough water (thanks to our desalinator), food and wine on board and we had no schedule.

Nearing Trindade island we received reports of a low pressure system with high winds on our course to the south-west. We decided to stay north of the island a little longer, and then head south.

This resulted in a rather unpleasant few days. The 17 – 20 knots of wind was enough to blow up spray at that angle of sailing and our normally well protected cockpit became damp with salt and rain as we had to ventilate it to offset the 30 deg C temperatures and high humidity. We were uncomfortably hot and sticky and really appreciated our showers.

After such an unpleasant spell there is nothing as wonderful as waking up to a sunny day, calm sea and good wind angle and speed.

Coming southwest from Ihla Trindade we wanted to avoid the shallow sea mounts, the myriad of oil installations and their support ships, and also have the most comfortable ride, so we juggled between the wind angle and the most judicious course for the coast.

We had several days of little to no wind but then, thanks to a few more favourable days, we made slow progress.

As we got south-east of Rio the wind slowly faded, typical of that area, and what little there was came from the west, our direction of travel! So we tacked, being rather determined to sail all the way. However, later that night we were in the busy Rio shipping lanes and heading in a westerly direction towards the coast when Karin woke me at 02:30 as things got rather boisterous. We had sailed into a thunder storm and the full mainsail and genoa were too much at night in 18 knots of wind.

With lightning overhead and ships all around and, not at our best because of fatigue, we spent the next three hours fiddling around, tacking and then being blown back on the old tack. It was very humid and any effort made us break out into a sweat. What didn’t make it any easier was the wind steadily backing to the southwest, confusing our efforts. Finally we got Moondust onto a tack that took her in the right direction and just about then the wind began to die.

By then we had about 65nm to cover to the first available Ihla Grande anchorage, and not relishing the prospect of taking perhaps 3-4 more days with little wind to reach it, we fired up the Iron Maidens and motor sailed. It was a pretty boring day, but we both got some sleep as we cranked along at 6 knots, finally entering the little bay of Enseada das Palmas, with its bouldered shore and steep hills clothed with verdant jungle, dropping our anchor about an hour before dark.

It took us 51 days to cross the Atlantic (including 10 days spent on St Helena Island), sailing a distance of 4 113nm (7 403km). None of it was difficult in itself but viewed in totality – the decision to sail, the shore and marine related preparations, purchase of the boat and assimilation of knowledge required – we felt it was a significant achievement and certainly a memorable experience!

23 Replies to “Crossing the Atlantic”