For a small island, 42km long and 10km wide, we found that Tobago punches well above its weight! It’s one of the last unspoilt Caribbean islands lying just south of the hurricane belt, close to the coast of South America and 33km north-east of its ‘parent’ Trinidad. 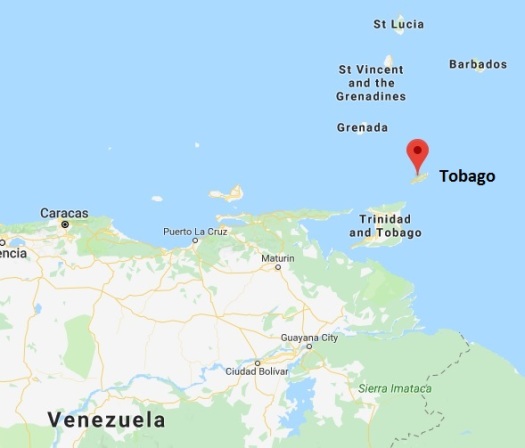 It has lush, tropical rain forest clad mountains with beautiful beaches and quiet bays. The island has two season: a wet and a dry season. The temperature is around 30 degrees C with no seasonal change.

Names like Pirate’s Bay, Man of War Bay and Bloody Bay reflect its colourful history, when in the early 1700’s Tobago was considered “No Man’s Land” because pirates, amongst others, had the run of the island.

Bloody Bay once was the site of a fierce battle of contending pirate bands after which the waters were crimson with the blood of the combatants, whilst Pirate’s Bay derives its name from the Morgans, Finns and Kidds who repaired their ships and hid their treasures in the bay off what is today Charlotteville.

The people, about 90% of African descent, are content, friendly and luckily for us, speak English, with a delightful West Indian accent. Thanks in large part to the boost the economy receives from offshore oil fields, Tobago’s infrastructure boasts electricity via undersea cables from Trinidad, tarred roads, an efficient, air-conditioned bus service and an airport. No shanty towns or malnourished people here.

Being once attached to the nearby South American mainland accounts for Tobago’s incredible diversity of fauna and flora. It is said that Tobago and Trinidad, with their 220 bird species have more than the rest of the Caribbean combined.

Perhaps the only downsides we discovered are the price of beer and the heat and humidity. Beer is about twice the price of that in South Africa and amazingly eleven times the price of local diesel, which, granted, is very inexpensive at about US$0.65/l.  Weather-wise, we are now relatively acclimatised, having to unearth our sweaters when the temperature occasionally drops below 27 degree C.

We anchored in Man Of War Bay, surprised by the number of other cruising boats from as far afield as Alaska and mainland US, Norway, France, Germany, Canada and Australia. We went ashore to report our arrival to friendly and obliging immigration and customs officials and did some essential shopping in the few modest Charlotteville stores.

The next day we bused to the capital, Scarborough, where we bought a local SIM card and stocked up with groceries. Whilst waiting to return, one of the ladies at the bus stop expressed concern that the Charlotteville bus wouldn’t stop there, so unbidden, she walked us around to the correct location about half a kilometre away. Such nice people.

Having been isolated from the world at large we were surprised to learn that the soccer World Cup final was to be played that first weekend, so we went and joined an enthusiastic crowd in one of the beach bars. Croatia was the local favourite, the exuberance of the crowd slowly waning with their imminent defeat.

Maintenance work occupied us for a week or so and, with the heat it was essential to cool down, so we snorkelled each day for an hour or two, also getting some exercise.

We spent many happy hours snorkelling.

The sea water is clear and the temperature just right to allow us to remain cool for a few hours. The underwater life is amazing; fish, eels and rays of all colours, shapes and sizes, along with 44 coral species.

On Heritage Day we joined fellow cruisers for the famous annual goat races; a worthy substitute for horse racing on an island this size!

We spent several pleasant evenings on neighbouring yachts learning what the Caribbean has to offer and one afternoon we went to the beach and joined them in the water, bobbing chest deep on pool noodles, drinks in hand. We drifted into a nearby group from Trinidad who was in party mood, tossing a bottle of Hennessey cognac from one to another and keeping the boys’ glasses topped up as well.

Fishing is important on the island and each day local fishermen with powerful Yamaha outboards on their open boats would troll for game fish using hand lines. Being thus far rather idle with our fishing we bought fish from them and experimented with a kedgeree recipe… Delicious!  It was also fruit season and a short walk along the road would see us return with a sweet windfall of mangos and avocados.

After three weeks we had exhausted all the good snorkelling spots and felt that it was time to move on. We cleared out, receiving permission to spend two weeks to traverse the various bays on the 40 km jaunt south to Store Bay, which falls under the Scarborough jurisdiction. Our anchor chain and bridle were covered in weed and a few young barnacles, reflecting the length of our stay.

10 Replies to “Tremendous Tobago – Part One”