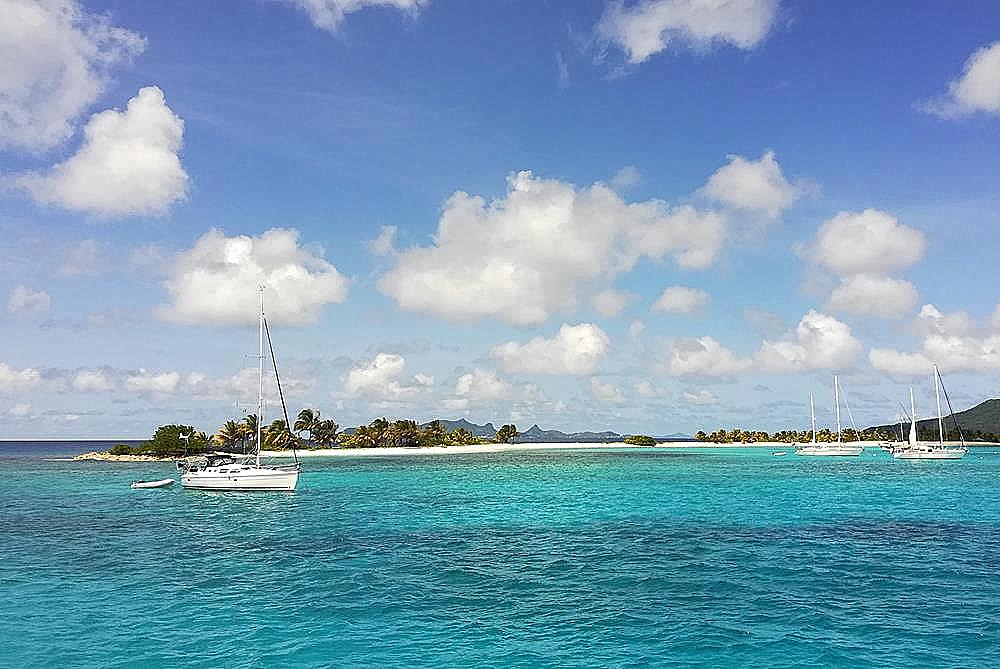 Our haul out in Trinidad completed, we headed for Carriacou, 25km north of Grenada. The north west flowing Equatorial Current pushed us in the right direction, which was just as well as the predicted wind only appeared later in the afternoon, when on one of our fishing lines we caught a beautiful Black Hind; a mature fish which was a challenge to scale and fillet, but a delight to eat in a soft, fragrant curry.

Once in the full Atlantic swell Karin began to feel sea sick and turned her attention to one of the buckets, shortly afterwards retiring for an early night. She didn’t get much sleep, but always the stalwart crew member, she refused to rest longer and took her four hour watch between midnight and 04:00. Shortly after dawn we passed the northern end of Grenada and made landfall at Tyrell Bay, Carriacou at around 09:00.

Carriacou is known as the ‘Isle of Reefs’ evidenced by the many shipwrecks we saw. Its people originate both from Africa and Scotland, the latter group settling in the village of Windward and starting the local boat building industry, which persists to this day. Both the appearance and speech of the people in that area still reflect their lineage.

Very different to Trinidad’s green murk was the crystal clear, turquoise Atlantic water that now surrounded us. We found a spot to anchor amongst the other 80 odd yachts and painlessly completed the clearing in formalities the next day.

After a few days we sailed north to Sandy Island in the marine protected area. More crystal clear turquoise water encouraged us to take the dinghy to nearby Mabouya Island, around which we swam, seeing our first octopus and nurse shark.

Wishing to climb one of the two high points on the island, we sailed a few kilometres and anchored off Hillsborough from where we could hike to Chapeau Carre which is at 954ft just one foot lower than the highest point.

Doing it the hard way

Anse La Roche, a secluded beach just to the north, is famous for its turtles which lay in May, the eggs hatching in August. We had missed the season but took the chance to snorkel and do some maintenance, taking down the genoa for the first time for some preventative repairs. Finally, the job complete amidst a chaotic jumble of sail and lines on the trampoline, we discovered that we couldn’t pull up the sail on the halyard, which had apparently got hooked up inside the mast.

Pulling it back and forth we then succeeded in pulling the wire loop too far up and through the outlet near the top of the mast, which meant that Karin had to winch me up; never an easy job for either of us. I fed the steel loop back in over the pulley, but still could not persuade the stiff wire to descend any further. Still up the mast, in desperation I called another cruiser who came on board to assist. After a minute or two he looked around and exclaimed in his broad Aussie accent, ‘Ah here’s your problem mate’ releasing the other end of the halyard which I had earlier tied to a fitting on the foredeck! Over a sundowner that evening we coined a new motto: ‘Why do it the easy way when there’s a hard way’.

Our next anchorage was off Windward, around the northern tip of the island, where we followed the advice in the cruising guide and did our first bit of ‘eyeball navigation’. Karin went up the mast and, seated at the first set of spreaders, directed Moondust as we threaded our way along the sinuous channel. As much as anything this was a dry run for coral areas we will encounter later, where the charts may be offset by as much as 200 metres! By then we need to be knowledgeable of all the factors one may observe to indicate depth and speed of water flow.

We anchored on the sheltered side of the reef out near a shipwreck, again in perfect turquoise water and later took the dinghy around the reef, looking in vain for snorkeling areas. We moved Moondust four times that day, finally exiting the southern end of Grand Bay via a narrow gap close to the headland rocks as we headed for Saline Island, at the south of Carriacou.

This seemed like the perfect spot and when Karin went in to check the set of the anchor she saw coral, plenty of fish and three turtles. Good anchor holding was difficult, however, as there was only a thin layer of sand over the shallow rock shelf. Finally we moved Moondust to deeper water on the edge of the shelf to ensure that the anchor could bury itself properly in deeper sand.

The snorkeling was superb in the small area of coral and we resolved to set off in search of a supposedly even better area to the south west of the island the next day. Anchored down wind of a small patch of mangrove trees we should have been better prepared for mosquitoes but were amazed at the squadrons that invaded the boat at sunset.

The fabled snorkeling spot eluded us and when the current almost swung a nearby mono-hull into us that afternoon we decided not to try to re-anchor and brave the mosquitoes for another night but rather sailing to Frigate Island a few miles away.

The west side of this island is not a favoured anchorage, but did us well, especially as the wind then piped up to around 20 knots for five days, bringing rain and sending all the other local yachts to more sheltered spots. Being on a catamaran we were reasonably comfortable, in spite of ocean waves reflecting off nearby Large Island.

Finally it was time to start heading south for Grenada to shop and pick up some visitors. We sailed south to Ronde Island, on the way passing Kick’em Jenny Rock, doubtless a product of volcanic activity for which the area is well-known.

An underwater volcano, known as Kick’em Jenny lies just a few miles to the south-west of Ronde Island and the chart shows a marine exclusion zone lest an eruption should take place.

Due to strong and conflicting currents that flow around the islands we undertook even short expeditions in the dinghy to nearby islands with caution. One such outing was to the Three Sisters rock outcrop, a mile south-west of our anchorage. This was a memorable excursion with remarkable underwater topography and a cave, the clear water beautifully lit by the sunlight shining through holes in the rock.

One Reply to “Carriacou and the Grenadines”