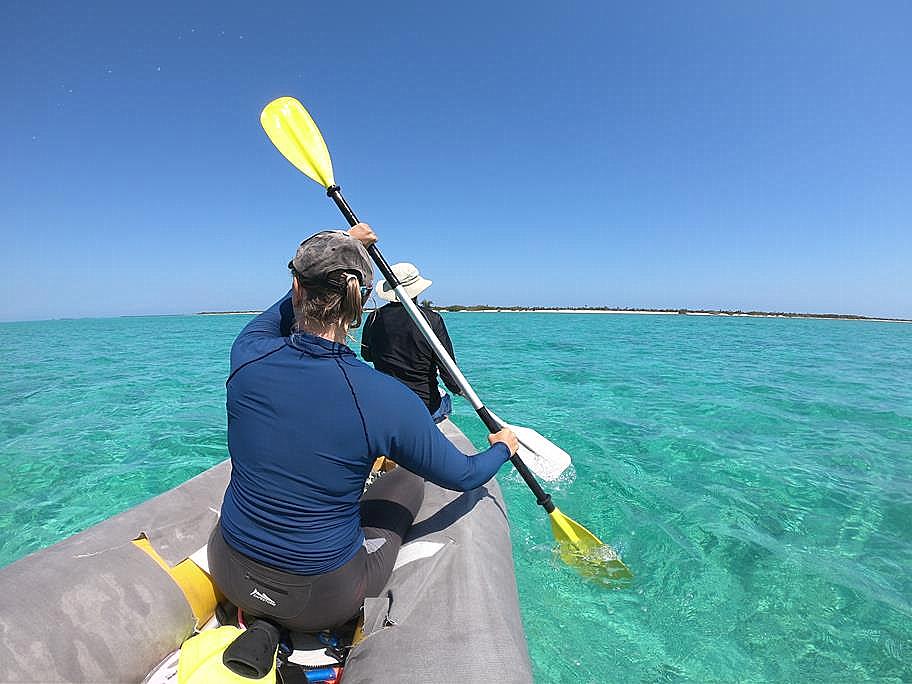 We were excited to be heading for Santiago de Cuba, Cuba’s former capital on the south eastern coast and one of the few points of entry. What should have been a three day sail took us five due to the wind shadow caused by the 1900 m Hispaniola mountain chain. Having daughter Megs on board eased the night watches considerably as we could each get six hours’ sleep instead of four.

Southern Cuba sits on an underwater escarpment that rises sharply from depths of thousands of metres and it has some amazing, almost completely land locked natural harbours, Santiago de Cuba being one.

After entering via the narrow channel we tied up at the marina and were warmly greeted by its manager who told us to stay on board until the doctor had examined us. A white coated lady arrived, enquired about our health, took our forehead temperatures and cleared us to proceed on shore.

The entry formalities were friendly and simple but very slow; copious computer entries followed by an archaic Epson printer clattering its way through four back to back pages of information.

Gardens of the Queen

We were up early the next morning to get clearance to sail to Cienfuegos, via the Jardines de la Reina (Gardens of the Queen –  discovered and named by Columbus in honour of Spain’s Queen Isabella).  The lure of snorkeling in a pristine environment, reputed to be perhaps the best in the world had brought us here. Indeed, the true beauty of the Queen’s garden lies beneath the water!

To say that the ‘Gardens’ are inaccessible would be a gross understatement. They form an archipelago in the Gulf of Anna Maria, stretching from southeast to northwest for over 150 km, and stretching inland to the Cuban coast about 130 km to the northeast.

Research indicated that the best snorkeling would be found far off the mainland in areas washed by deep ocean water along the outer edge of the bounding island chain. Little wind meant that it took us four days to reach Canal Cachiboca, one of several passages from the open ocean into the shallow inland waters of the archipelago.

With plenty of coral here, we hoisted Karin up the mast to serve as lookout; one blast on her vuvuzela would signal a turn to port, two blasts for starboard and three to STOP! The entrance to the lagoon was simple, however, with few hazards and all the effort of preparing Google Earth screen shot charts proving unnecessary.

Shortly after anchoring we swam towards several small mangrove islands several hundred metres away, mindful of the reversing tidal current. These trees grow in water about two metres deep, their roots forming a solid pedestal surrounded by sand. The water was warm and clear and we were amazed at the number of fish in the root clusters.

We had read about salt water crocodiles and we kept a good eye open for them. With the abundance of food we doubted that they would pose any danger, but stories of the Australian ‘salties’ and our knowledge of the deadly African crocs gave us pause for thought.

We spent three nights at this peaceful anchorage, with no mosquitoes or other boats. Daily, after breakfast, we would head out, either swimming from Moondust or using the dinghy to explore further afield. There were plenty of large barracuda patrolling the waters and circling us. We also came across a large nurse shark which changed direction and swam directly towards us. I had started filming with the camera on the end of its extension stick and the girls, I later learned, retreated behind me. The camera committed me to hold my ground and I expected the creature to veer off, but it approached quickly, passing within a few centimetres right underneath my legs.  Whilst these sharks are very docile their bites are the fourth most common of all shark bites because people try to touch them.

We next made a half day sail northwest to Canal de Caballones, anchoring in the sheltered lee of Cayo Anclitas but with no reef in sight for snorkeling. Due to time constraints, Megs had decided to fly back to Panama from Cuba, rather than sail with us. We took the dinghy around a headland and into the mangroves to where we had learnt there was a floating hotel operated by Avalon Tours.

There we were warmly welcomed by two of the staff who not only said we were welcome to use the open internet connection, but brought us drinks, and, after we had finished up, refused our offer of payment. Our first taste of Cuban hospitality! With the flights organised, we relaxed knowing that we had an extra week to spend in the area.

There were two large Avalon Tour boats at anchor near Moondust and I beckoned to one of their passing service boats to enquire about snorkeling locations. They were very friendly but said they couldn’t easily explain this to us, instead offering to take us on a short tour about three kilometres across the canal. Two 150 h.p. motors whizzed us there in a few minutes and we had our first amazing taste of Gardens snorkeling on the ocean side of the reef.

Typical of this area, the sea bed, covered with patches of hard and soft corals gradually shallowed from three to four metres towards the exposed backbone of the coral reef which runs parallel to the shore, about four hundred metres out. The profusion of fish and sea life has to be seen to comprehend the colours and diversity! We swam along a good portion of the reef and then after about 90 minutes climbed back on board and tucked into sliced papaya whilst we motored a little further offshore to see the silky sharks. No sooner had we slowed when about a dozen slim sharks arrived and swam around the boat, their soft skins brown against the aquamarine water.

We were so enchanted with this area that we twice took Moondust across the channel to anchor and once again enjoy the underwater beauty. When we were tired and had started to chill, we would go back to Moondust for a warm shower, hot coffee and freshly baked bread.

Tania from the floating hotel brought a Parks Board official on board who wished to verify that we had permission to be in the Gardens. They both appeared to feel awkward about the enquiry and were visibly relieved when I showed them our official documentation and explained that we had paid a fee for a permit to cruise here. This encounter was shortly followed by another visit from Tania, perhaps by way of an apology, bringing us a generous gift of wine, and piles of fruit and vegetables, all of which were in short supply on board. We were overwhelmed and couldn’t have agreed more with well known cruising writer Nigel Calder, who commented on the ‘spontaneous generosity’ of the Cubans.

Wishing to do more mangrove snorkeling and having learned that the hotel boat had a resident croc named Tito in that section of the mangroves , we asked the skipper of one of the Avalon Tour boats about the safety of swimming in these waters. He seemed quite relaxed with the idea, but went on to say coincidentally that one of their guests had been bitten just the day before when she got between two crocs competing for food. Luckily she only sustained very bad bruising on her thigh and one puncture wound through her wetsuit. Hearing that, the Moondust girls resolved to swim with sturdy sticks in future!

Before he left the skipper asked if there was anything we needed. Having run out of yeast just that morning we asked if they could spare any. They returned a while later with the yeast as well as ice, beer, wine, milk, fruit and some boat wax which they hoped would remove the yellow stains that resulted from acid rain in Santiago de Cuba. They joined us for coffee, but declined any notion of payment. We were blown away by these wonderful people!

Our second last visitor that day was the Avalon Customer Relations representative. He pulled up alongside to greet us, saying that he knew we had permission to be in this area and just wanted to say hello. Finally, the skipper of our dive boat dropped by to say hello.

The next day our sortie to the hotel boat to pick up an internet signal to check the status of Megs’ travel arrangements was met rather coolly by one of the staff which we felt was rather strange. Shortly after arrival back on Moondust another boat pulled up and two men solemnly informed us that they were from National Parks, contrary to the Avalon logos on their clothing, and that we were not allowed to be in this area. That seemed odd after all we had experienced but when I told them of our earlier decision to sail the next day they were satisfied.

Back in South Africa Megs looked at the promotional material on the Avalon website and found this: “Wake up in your cabin and look through the window: all you will see are lonely white sand beaches and blue waters. There is no one else there! Only your boat in many miles of mangrove keys, beaches and rocky islands. No other boat, nobody else diving….” This helped us to understand the final ‘official cold shoulder’ from what otherwise was a group of the most charming people one could ever hope to meet.

We had a nice breeze to sail across Canal Boca Grande and to an anchorage just off Cayo Alcatracito, where there was just one other yacht. We used the dinghy to explore the inland mangrove lagoons, but they were too shallow and the water too cloudy to snorkel, so we extended the outing, exiting the lagoon at its eastern end which took us to one end of the five kilometre long reef.

Over the course of two days we swam this whole reef, marveling at its beauty in the warm, calm waters. On our final day we paddled to the beach to check for turtle hatchling tracks. A few minutes there were enough, as minute, voracious ‘no-see-ems’ surrounded us in a visible cloud. We fled back to the dinghy, poling out into deeper water, swatting the bugs away.

We had earlier seen a craft entering the passage in the reef and as we neared, hands beckoned us aboard a rusty commercial fishing boat. With his wide smile, Michael enthusiastically introduced himself and his crew, in English. We could, however, only pick up about every fifth word; the gist of which was that he had a present of fish and crayfish for us. He showed us the crate, and it was ours for just one bottle of rum. Downwind of Michael’s breath I surmised that he must have just finished the last of their supplies. So we picked up one of our precious two liter ‘bricks’ of rum, knowing we could get more in Cienfuegos. At the sight of this Michael’s eyes lit up and the crate was topped up until there were nine large lobsters and three nice fish.