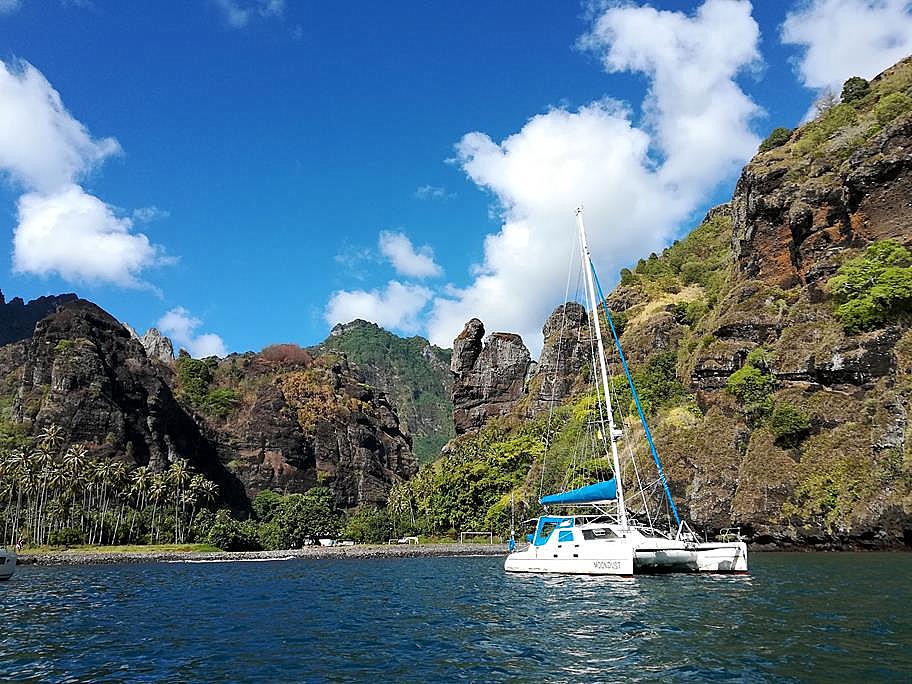 Each of the French Polynesian archipelagos has its own unique character and we shall remember the Marquesas for their scenic beauty with majestic mountains, hiking routes, exquisite waterfalls, abundance of fruit and friendly Polynesians.  Of the six inhabited islands, just a spec in the Pacific Ocean halfway around the world from South Africa, we visited five: Fatu Hiva, Tahuatu, Hiva Oa, Nuka Hiva and Ua Pou.

We made our landfall in The Bay of the Virgins, probably the most scenic bay in all of the Marquesas, on the leeward side of Fatu Hiva.

This group of 12 islands was visited by Captain Cook in 1774 and in 1848 claimed by the French, who still support this archipelago as a French overseas territory. Even though these lush volcanic islands are extremely remote and mostly unspoilt, the French have invested in infrastructure: potable water, docks for provision boats and local fishermen, roads, medical care, cell phone connectivity and even landing strips for each island!

However, internet is frustratingly slow and since the provision boat only comes bi-monthly, it is usual for an island to run out of items, which may vary from local sim cards to fresh vegetables.

After our first night of blissful unbroken sleep without night watches, we went ashore to explore the small village and hike to the waterfall.

As we passed the church, a friendly man called us over and picked us a bag full of pampelmouse from his tree. We’d soon learn that the islanders are keen to exchange fruit for fishing tackle or luxury items like rum, wine, beer, perfume or lipstick. Fortunately Pete brought a few boxes of fish hooks for this purpose.

Apart from catching up with our French friends from Temptation, we thoroughly enjoyed the company of the crews of a few of the other yachts anchored in this spectacular bay. Cleaning Moondust’s hulls from goose barnacles and brown and green stains above the waterline kept us busy for a few days and during this time the National Geographic passenger liner Orion arrived.

We could see early morning activity on shore as the islanders prepared to entertain its passengers who were taken to land in inflatables. The Polynesian women were dressed in bright colours, each with a flower in her hair, and entertained the visitors with dances while the men played the drums. Local curios were on display and a good time was had by all. As soon as the last rubber duck left for the mother ship, all the stalls came down and within about 15 minutes village life was back to normal.

We thoroughly enjoyed our week long stay in The Bay of the Virgins, but when we first lost our stern anchor and later on dragged our sturdy Rocna front anchor in the poor holding, it was time to move on to Hiva Oa, stopping on the way at Tahuatu. (By some miracle I spotted our stern anchor when I went searching for it and Pete managed to dive down 8m to retrieve it!)

Even though the wind was very light upon sailing to Tahuatu we were still cautious of wind sheer around the southern tip of the island and when it later gusted up to 25 knots we were very relieved that we had indeed already reefed the main sail.

The southern peninsula was quite dramatic. A stark, craggy mountain rose with tooth-like peaks straight from the sea. As we progressed north, the stark rock face, scarred with ancient wounds, gradually transformed into softer green hills frequented by feral goats.

We were relieved to find good sand holding for our anchor at 17:00 in the most southerly bay.   Here we had our first snorkel in the Marquesas and were amazed to see new fish species, all with bright colours and interesting patterns as well as two octopi.

Hanamoenoa is a very popular bay on the north-western side of this island, but as it was crowded with other boats, we opted to anchor off a palm fringed beach just to its south and enjoyed more snorkelling.

It was a half day sail to Atuano Bay, where we had to withdraw money, clear in and do some provisioning. This small bay was so overcrowded that every boat also put out a stern anchor, so as not to swing into others when the wind direction changed.

It was quite a walk into town from the harbour, but fortunately we had some success hitch hiking.  French Polynesia requires visitors from outside the EU to post a bond which will cover medical evacuation, if necessary. Since this bond is refunded in Polynesian Francs at the end of your stay, we opted to rather buy one way air tickets refundable in our currency.

With my requisite visa and our air tickets, clearing in at the Gendarmerie was quick and easy. The reasonably well-stocked grocery store kindly gave us a lift back to the harbour with a load of shopping, intended to last us for a few weeks or so. It was nice to briefly meet up again with Hürgen and Laura who were our line handlers during our Panama Canal transit, but we were in haste to leave this overcrowded rolly anchorage with its small craft dock apt to mangle any dinghy caught under it as the tide rises.

We moved back to Tahuatu; this time Hanamoenoa Bay was quiet and two Manta Rays welcomed us as we glided in to anchor off yet another golden coloured, palm fringed beach.

When this beautiful and well protected bay began to fill with yachts, we decided to move on to Nuka Hiva. Our overnight sail started well, but by the time I went to sleep we’d hit Hiva Oa’s wind shadow, which made the wind very light and variable. Pete had a very difficult watch trying to make headway but luckily the wind picked up again to 16 – 18 knots from astern when I did my watch. We both got another two hours’ sleep but were nevertheless quite tired when we entered Baia D’Anaho on the northern side of Nuka Hiva. It proved quite challenging to anchor in 15 knots of wind, searching for a safe patch amongst big coral heads and ten other boats.

About two kilometres out of the town, we visited a well preserved archaeological site where traditional Polynesians lived before these islands were westernised. The then Marquesan population shrunk from 80 000 at the time of European arrival to 15 000 in 1848, and 2 000 in 1926, mainly due to epidemics brought to the Marquesas by early navigators, traders, missionaries and whalers. Archaeological remains of ancient communities are still found all over the Marquesas.

In the nearly two weeks that we spent in this delightful bay, we saw a few yachts come and go, until finally it was time for us to lift our anchor and move south around Nuka Hiva to the capital, Taiohae, to provision for the Tuamotus.

Taiohae is a large bay with a sandy bottom and it had ample space for the 20 plus boats we found there. We normally prefer quiet, remote anchorages but we found Taiohae and its people delightful.

Our last stop in the Marquesas was Ua Pou, with its spectacular tooth-like mountains, beautiful waterfall and once again, friendly people.

Sadly, when we got a favourable weather window for the four day sail to the Tuamotus, it was time to say goodbye to the spectacular Marquesas.