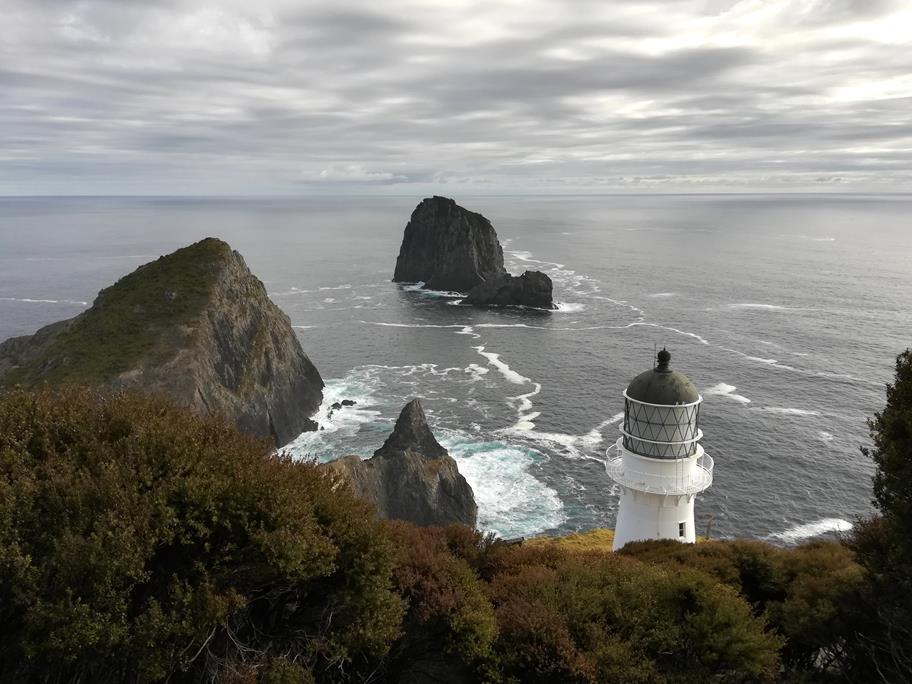 I arrived back on Moondust shortly before Christmas after a wonderful three week visit to my family and friends in South Africa. In my luggage were quite a few items for Moondust, amongst which was our new Genneker, made by North Sails in Cape Town.

It was good to be back and also to again see Rick and Liz, Pete’s brother and sister-in-law, who were visiting from Australia. Rick was very helpful and he and Pete finished a number of two man jobs while I was away.

EXPLORING THE BAY OF ISLANDS

After stocking up the larder in Paihia we set out to enjoy the Bay of Islands, situated on the east coast of New Zealand’s northern island. This vast bay, where Captain Cook landed in 1769, has 144 islands and a choice of anchorages, sheltered against various wind angles. A very necessary attribute as the winds were very variable and at times, strong.

The Bay of Islands, described as the cradle of the nation, is of historic importance as this is not only where Cook arrived but also where the peace treaty was signed between the British government and the traditional Maori inhabitants, at what is today known as the Waitangi Treaty Grounds near Paihia. Russell, which today is a touristic little hollow, was once the capital of New Zealand.

END_OF_DOCUMENT_TOKEN_TO_BE_REPLACED

It was Monday when we pulled up the hook in Tongatapu and, with scant breeze, ghosted west across the inter island waterway, luckily aided by the current. We had delayed our departure waiting for the right weather, as this passage is well known for its challenges and we’d heard that a sailor had just lost his life close to New Zealand after getting it wrong.

We chose to set sail despite the wind being forecast to be forward of the beam, but, as it was calm Karin would not get seasick. For 36 hours it was delightful and we averaged over 5 knots, using the time to stitch in some much need patches on our dinghy’s sun cover.

From the forecast we knew that the wind would turn a full circle back around the compass and my slumber was curtailed at 01:30 on the second night as Moondust reacted to the new wave and wind direction which reached 25kts at 03:00, forcing me to reef down and roll in the genoa a bit. Now we were moving well through the water at around 5-6kts but into adverse conditions of current, waves and wind, thus only making 4 knots over the ground. At dawn we approached Minerva North (there are two reefs about 20nm apart) and finally neared the pass at around 15:00.